Posted on November 22, 2013 by admin Posted in Uncategorized 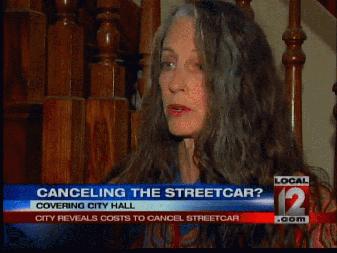 Updated: Thursday, November 21 2013, 11:57 PM EST CINCINNATI (Angenette Levy) — Canceling Cincinnati’s streetcar project could cost as much as $125 million, according to numbers presented to city council by the project manager Thursday.

Vice Mayor Roxanne Qualls, an avid streetcar supporter who may have lost her bid for mayor due to the project, implored incoming city council members to give canceling the streetcar serious thought.

“Challenge them really, really hard on the numbers. Make them prove that this is not just blowing smoke,” Qualls said at the meeting.

The streetcar is a $148 million project. But Deatrick said $15 million is in escrow due to litigation with Duke Energy over costs of relocating utilities. An additional $7 million is for contingencies, or unexpected expenses.

Deatrick said the streetcar is on budget and on schedule. But Mayor-Elect John Cranley, who made stopping the streetcar the hallmark of his campaign, said he doesn’t believe the numbers because they were put together by people who are “biased.”

“The fact of the matter is it doesn’t take $40 million to say stop and that’s a scare tactic,” Cranley said. C

“The level at which these folks are spending money, $50,000 a day, talking about adding night shifts, shows an unprecedented contempt for the voters and the voice of the voters,” Cranley said.

Meanwhile, Thursday night, property owners along the route met with a team of lawyers to discuss legal options. The media was not welcome at the meeting. But Kim Starbuck, who owns  a building on Elm St. across from Findlay Market, attended.

She and her husband bought the building two years ago and have renovated it to include a storefront and apartments.

“The Streetcar was a big part of the confidence that we had to put our personal funds into this development project,” Starbuck said. Starbuck said the project cost $1.5 million. She said two of her children moved back to Cincinnati from Brooklyn, NY with the belief that Cincinnati was moving toward the future.

“We feel that the city is not just walking away from something that’s good for everyone but it’s very personal to investment,” Starbuck said.

Cranley said he plans to announce the creation of a task force to study alternatives to the streetcar in the next couple of weeks.

Would you like to learn more about the Crown Building? We'd be happy to answer any questions.